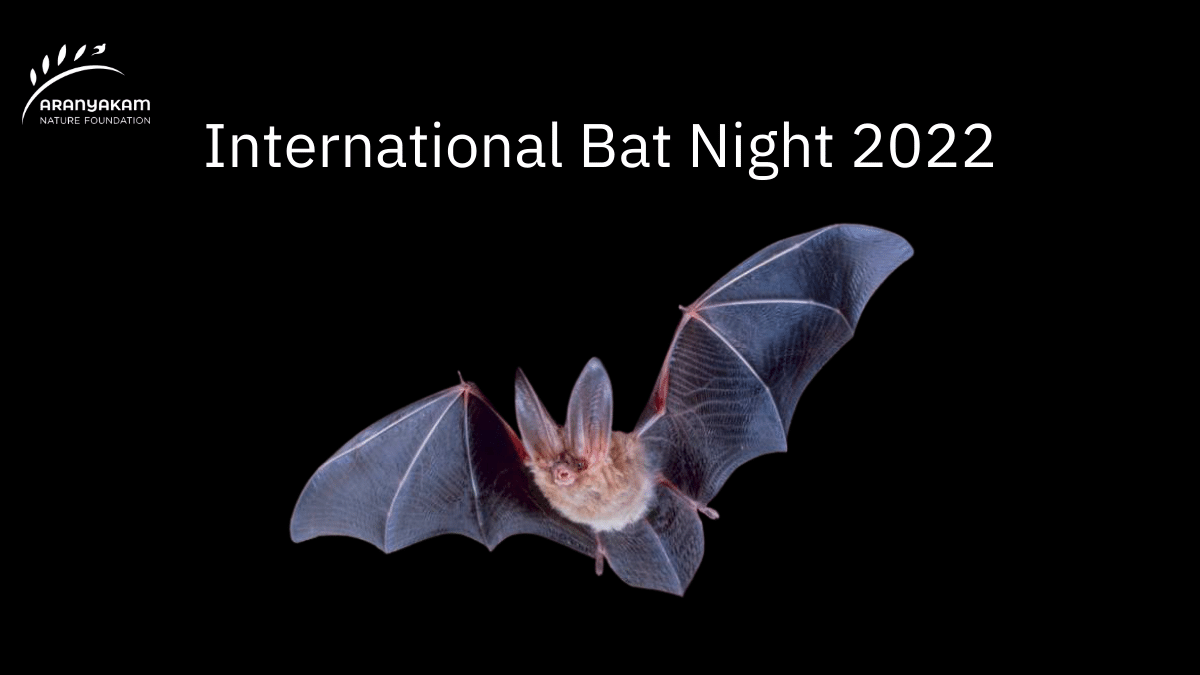 You might be familiar with an evening sky, colored beautifully with a tint of orange, red, and purple shades. When we look at it, we see silhouettes of hundreds of bats coming from nowhere.

But most of the time, some of you miss enjoying that view due to a mindset that bats are something scary or indicators of some bad omen. We cannot be blamed for this because that’s how we were all brought up. We grew up listening to horror stories and misbeliefs from our grandparents that bats are always evil. Also, from the 1890s Bram Stoker’s Dracula to the latest season of the famous Netflix series, Stranger Things, where Eddie Munson rocked the show with the lyrics from Metallica, bats were portrayed as devilish characters.

Look at the generation gap we passed! These visual communications continue to still portray bats as vampires or something related to evil. In addition to this, the recent outbreaks of zoonotic diseases and related unscientific information spreading through social media and frontline newspapers have made the lives of bats more miserable. 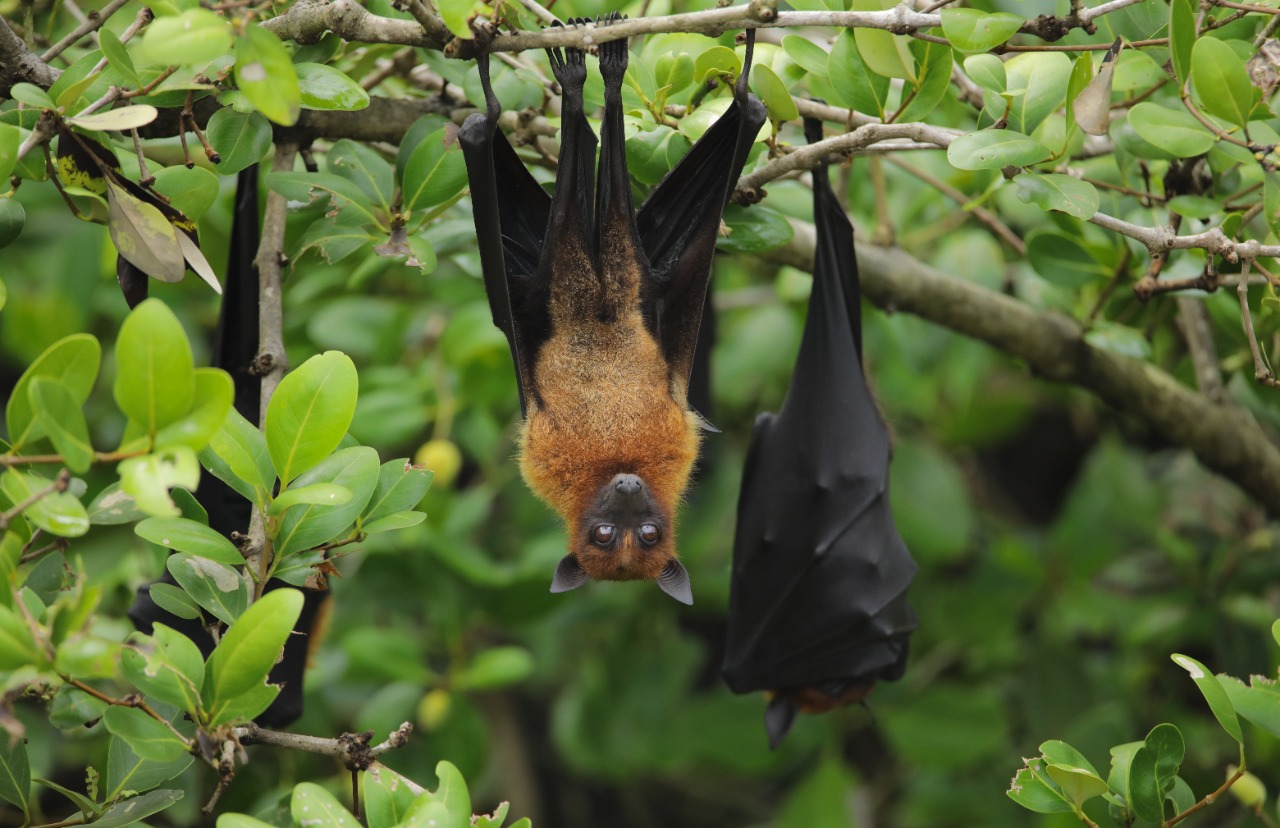 But what is the truth behind this? Are bats the only animal that spreads diseases? Why are bats always portrayed as negative characters?

The simple answer is we never tried to understand them better! So, building awareness about these misunderstood animals and busting myths related to them since 1997, bat enthusiasts, conservationists, and several other NGOs and institutes came up with the idea of celebrating the last Saturday and Sunday of every year’s August as International Bat Nights.

In the beginning, only participants from the US and UK were part of this event; now more than 30 countries all over the world celebrate this day through many events to spread the rightful image of bats to the general public.

Bats (Order: Chiroptera, which means “winged hands” in Greek) are the only mammals capable of true flights.

Yes, you read it right! They are not birds.

They are mammals, like us, with haired bodies and mammary glands to feed their young ones.

They are traditionally divided into two sub-orders: Megachiroptera (frugivorous) and Microchiroptera (insectivorous). But recent phylogenetic classifications divide the order into two, namely, Yangochiroptera and Yinpterochiroptera.

Because of their ability to fly and adaptation skills, bats occupy almost every niche in the environment.

Having a total of 1449 species across the world and being the second largest order of mammals after rodents, these lesser-known groups make up 20% of all the classified mammals on Earth and play many irreplaceable ecological functions.

By interacting with many plant species and exhibiting diverse ecosystem functions, including pollination, seed-dispersal services, insect pest suppression, and predators for many small vertebrates and invertebrates, bats play a major role in maintaining forest dynamics.

Bats are considered to be pollinators for more than 500 tropical angiosperms and seed-dispersers for many more.

There are studies showing that insectivorous bats benefit farmers by reducing the cost of artificial insecticides and increasing cotton production to US$ 741,000 a year by simply eating insects in their backyards!

Kerala, the southern side of the Western Ghat biodiversity hotspot is not behind in bat stats!

The small state is rich with a total of 48 species of bats that come under nine families (except Pteropodidae, all other groups are insectivorous).

Thanks to recent studies for the update! Species-level identification of bats is of great task with its complexity among the physical characters.

Forearm, body and tail length, ear, dental and facial characteristics are all taken into account for single species identification.

Now you know why bats are less studied! For general information, we are listing out a few families/habitat/roosting characters for a better understanding of bats. 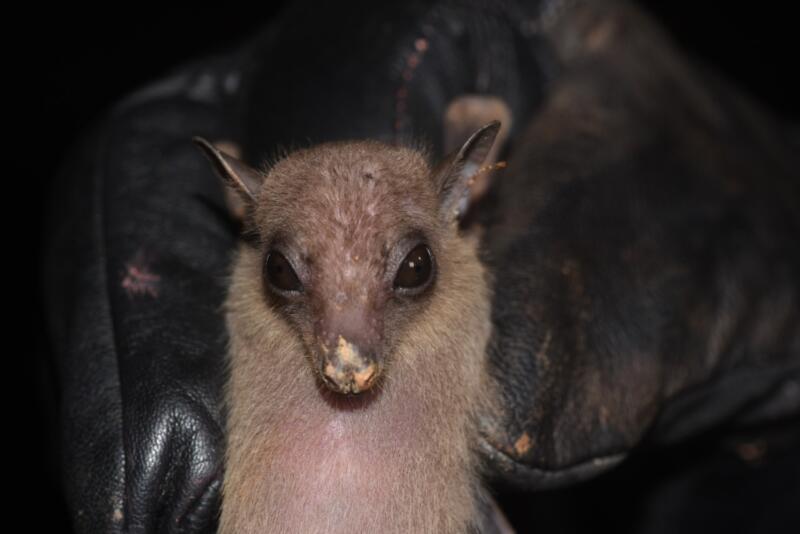 You are definitely familiar with this group. Large-sized bats (Indian flying fox) which fly through the dusky skies and the bats (Short-nosed fruit bat) which come to your backyard for collecting food from the Singapore Cherry or Guava or Banana are a common sight. 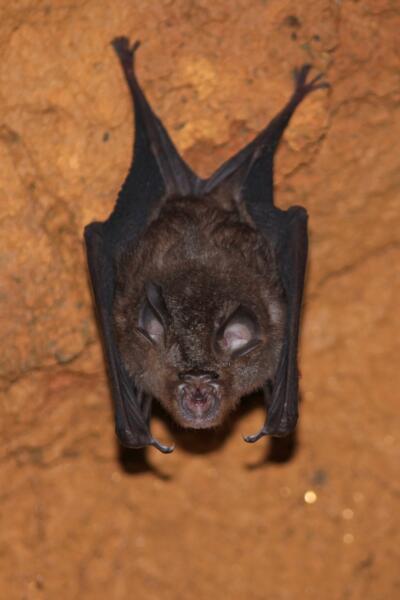 As the name indicates, these two groups were identified based on the structure of their noses.

Rhinolophidae has a horseshoe structure (sellas and lancets) whereas Hipposideridae has a leaf-shaped nose (wrinkled supplementary leaves). 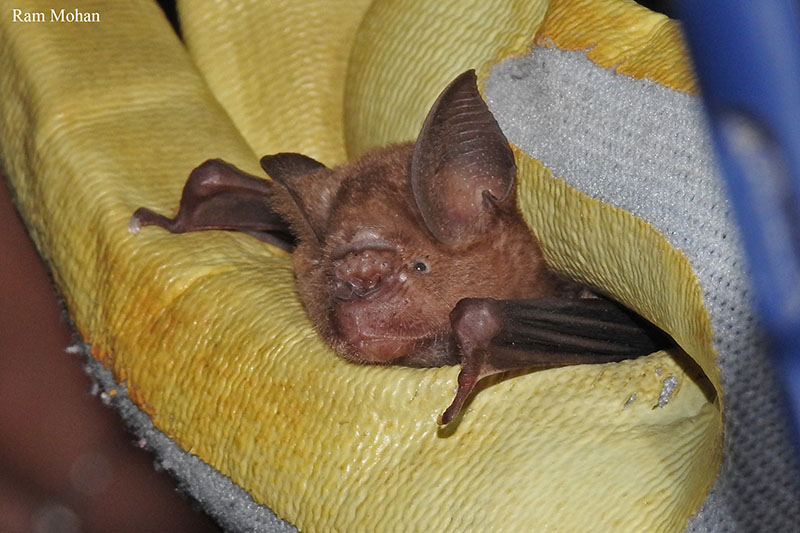 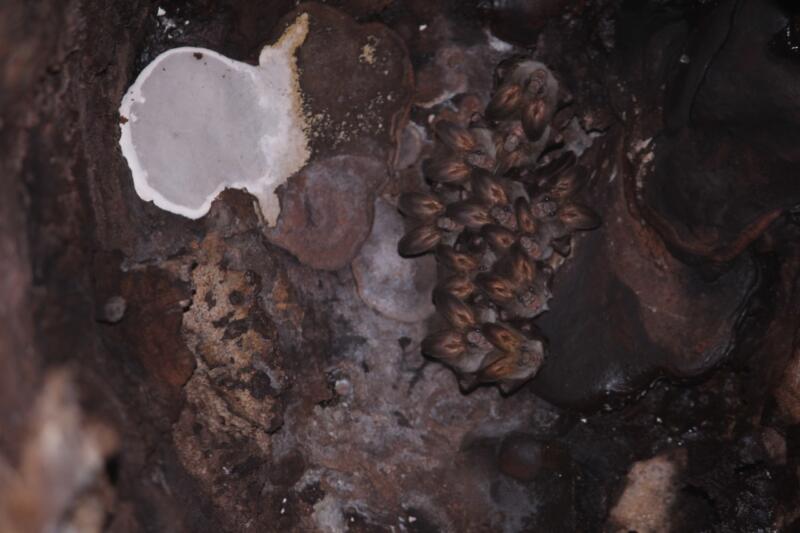 No, the name does not suggest that they are bloodsuckers, but they are carnivorous.

They are foodies with less number of followers on Instagram! The diet includes frogs, fishes, cockroaches, lizards, and even molluscs.

Some might have experience with bats entering your tv room and making a mess to find their way out. Mostly those species would be from this family. They can be easily identified with their long ears and heart-shaped nose base. Greater false vampire bat and Lesser false vampire bat are the two species of Megadermatids found in Kerala. 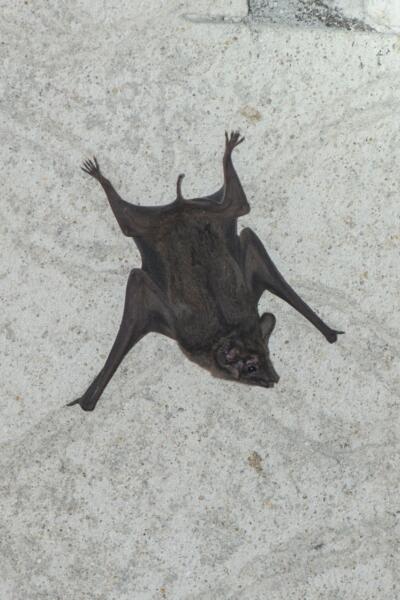 Three species of tomb bats are found in Kerala. They are usually found in old buildings, tree holes, and caves in both forest and human-modified landscapes.

The beard-like structures of Black-bearded Tomb Bats are easily identifiable if you observe them closely. 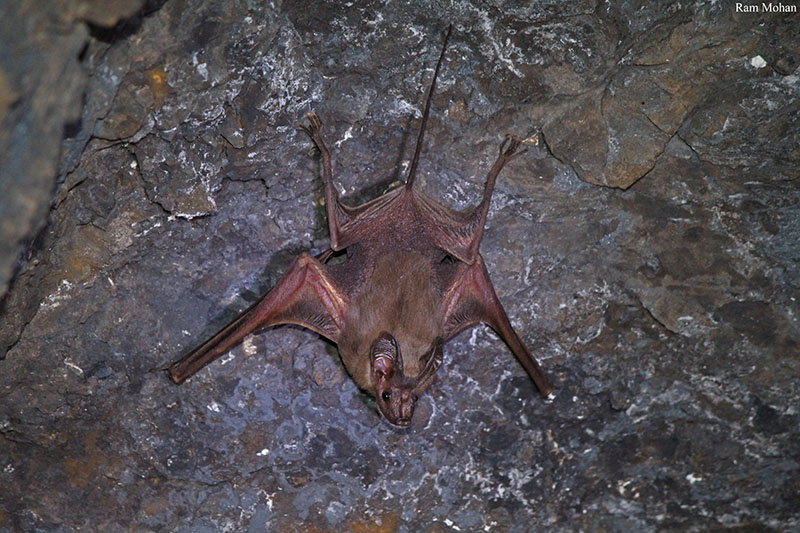 Like the name, these bats are characterized by long and slender mouse-like tails that project partially out of the thigh membrane. Little is known about these bats from Kerala. Lesser mouse-tailed bat is the only species recorded from Kerala.

These medium-sized bats have wrinkled lips, fleshy ears, and thick tails which are mostly free from the membrane. Three species of free-tailed bats are found in Kerala. 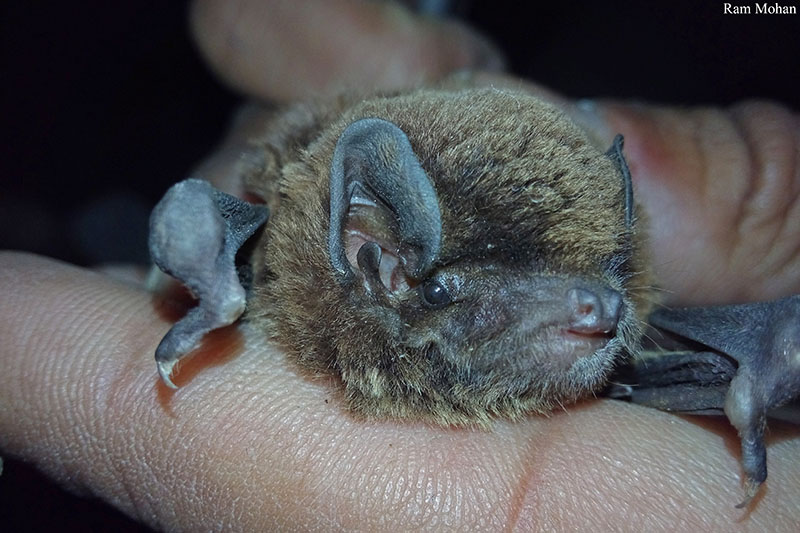 These are small-sized insectivorous bats. As the name indicates, they have wings that are double the size of the body. There are two species recorded from Kerala so far. 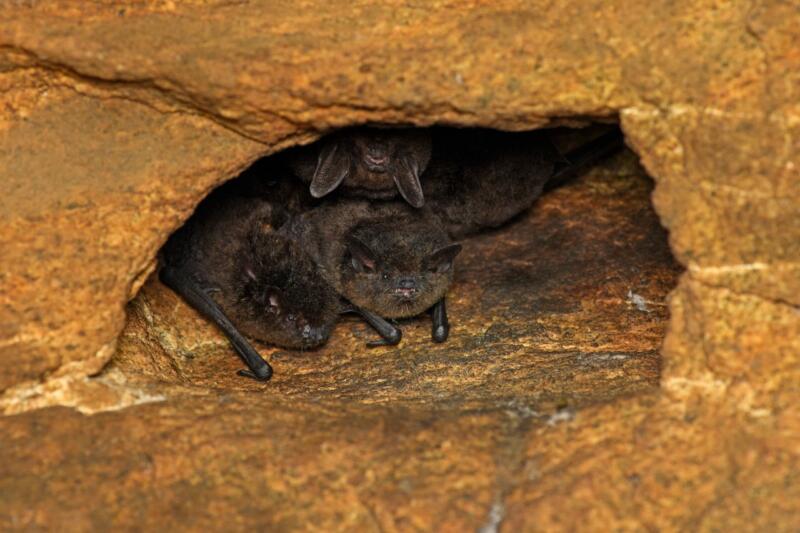 I’m closing the game here! A total of 20 species are recorded from Kerala.

This group may be considered as the ‘warblers’ of bats, owing to the difficulty in their identification. Species can be identified at the family level by looking at their inner ears called the tragus.

But it is very difficult to identify at the species level. These groups exhibit some beautiful coat patterns.

Painted bat is one among them with fascinating orange and black coat colourations for blending with their roosts amongst the similar coloured dried banana leaves.

Despite all this diversity, unique characteristics exhibited including true flight and echolocation, and the impressive ecological roles played by bats in maintaining the forest dynamics, we are only trying to find their negative sides of disease transmission.

Yes, bats are reservoir hosts for many viruses. But not all of them are there to spread or try to kill us with diseases.

Instead, we are the ones who are intensifying the effects of climate change through habitat exploitation and making the lives of these animals more stressful which would eventually lead to a disease outbreak.

Do not disturb or cause panic to roosting bats with explosives or don’t try to eradicate them without any scientific advice.

Do not enter a bat roosting cave without any necessary protective gear and measures.

Do not touch or make contact with an injured bat.

These are just some of the minor steps that we can take up for a healthy interaction with these creatures. It’s our need to coexist with these animals for the better days of our future generations.

If you are interested to learn more about bats

Just go out and observe the flying foxes which are flying charismatically in the evening skies. Note down the numbers, timing of emergence etc. There you go! Now, look around. You will definitely come across a lot of bat roosting sites. For eg: your house roofs are sometimes roosting sites for a vesper bat, the abandoned house near your playground may be home for a roost for many false vampire bats, streetlights act as foraging ground for many insectivorous bats, and your backyard fruiting trees are a food source for Pteropodids too! Sharing is caring!

Salim Ali’s fruit bat (Latidens salimalii), one of the three rarest bats in the world, is an evolutionarily distinct, monotypic, and endangered frugivorous bat species endemic to the Western Ghats of India. It is restricted to montane tropical evergreen forests, coffee and cardamom plantations with an altitude range of 700-1750m. Habitat loss, anthropogenic pressure from the plantations, meat consumption, and use in traditional medicine are reducing the already endangered population of this species. This is the only bat species protected under the Scheduled I category of the Indian Wildlife Protection Act, 1972.

National Wildlife Week is celebrated all over the country to [...]

About the Author: Nithin Divakar

Nithin Divakar is a PhD scholar in the Wildlife Biology Department of Kerala Forest Research Institute, Thrissur. After completing his Master's in Wildlife Studies from Centre for Wildlife Studies-KVASU in 2015, he has actively contributed to the on-ground conservation of bats and amphibians in the Kerala part of Western Ghats through research and stakeholder involvement. Following his interest and passion for bats, he focused mainly on species-specific activities including the long term conservation management of threatened and least concerned species in their distributional ranges. In this journey, he also got support from the Mohamed Bin Zayed Species Conservation Fund for the conservation of lesser-known endangered Malabar torrent toad, Idea Wild grant and the Conservation Leadership Programme Grant for the conservation of endangered Salim Ali's fruit bat in 2021.